Have you recently heard a brass band? You know, a band with…nothing but brass. Trumpets, trombones, sousaphones, French horns, mellophones, tubas, and — if we’re being a little generous with the definition of “brass” — saxophones of all sorts? Unless you’re a high-schooler in a marching band or live in New Orleans, it’s probably been a while.

WHICH IS A TRAGEDY.

I’ve been going to an outdoor music and film series this summer in Austin called Sound & Cinema. Every two weeks, Do512 and the Alamo Drafthouse host a free (YESSSS….FREEEEE) concert and film on the lawn outside of the Long Center. And I love it. Partly because it’s free, and partly because it’s a great way to see local music (for free) and popular films (also for free). Okay, mostly because it’s free.

Last week, the film was Pee-wee’s Big Adventure, the classic coming-of-age tale of a boy and his bike. But before the film started were local brass-ers The Urban Achievers Brass Band. They played this mix of rather traditional brass jazz (think L’il Liza Jane), more contemporary New Orleans style jazz (think Feel Like Funkin’ It Up) and a whole mess of hip-hop and pop covers (think the Spice Girls Wannabe).

Have you ever heard a brass band cover of the Bell Biv DeVoe classic Poison? I have and it sounds like this:

This series is a fairly awesome opportunity to hear new music from locals and see classic films (“classic” being a relative term). For free. Plus, the atmosphere is pretty great and fairly standard as to what you get in Austin. You can bring your chairs and blankets, your own snacks and drinks (though they’ve also got food trucks and drinks there), and just hang out with people and their numerous children and dogs for a few hours. What else are you going to do on a Wednesday night? Plus, once the sun goes down, the weather is ace.

You can catch The Urban Achievers Brass Band every Sunday at Banger’s here in Austin (sausage and beer and brass! Worth the trip.) and every second Sunday of the month at the White Horse.

Sound & Cinema plays tonight, but only as a make up for getting rained out last week. It goes back to its regular schedule on July 30th, then every other week for the rest of the summer. And ignore what the Long Center’s page says about Sound & Cinema not allowing dogs or booze. There’s nothing BUT dogs and booze at that place. 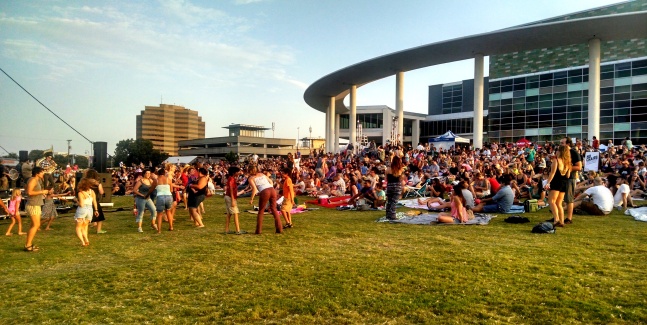