I saw Neutral Milk Hotel almost a month ago, twice, in fact, but it took me a while to get to this point to actually write a show review for two reasons: 1) Real job got in the way, 2) Seeing the band you’ve idolized for a decade but never got to see live, and then you see them live and they’re amazing, takes a while to process and I didn’t want to write 2000 words consisting of “Best show evaaarrrr” over and over again. But seriously? Best show evaaarrrr. For real, people. For real. Greatest thing I’ve ever seen.

First, Taipei. NMH played at a venue called Legacy. I went to check out the venue during the day just to see what was up — it was one of these artsy, warehouse complexes with cafes, photography studies, art exhibitions, things like that. A good thing to see in the middle of a modern Asian city. Also, I wanted to see if I could buy a ticket. Did I mention that I went to Taipei and didn’t actually have a ticket to see them? I’m not the best planner. But I found the venue and the door was open so I went in, because they shouldn’t leave their doors open if they don’t want strangers off the street wandering in. It looked to be a pretty good venue — very similar to Mao here in Shanghai except single level for about 600 people. I wandered around a bit and then I got (politely) kicked out.

The show was at 8 the next night, but I got there about half 6 because of the no-ticket situation and there was already a queue. But there were still tickets! I was a little afraid they would sell out, pre-show. I knew I was also going to see them in Tokyo, but it was still such a relief to actually have a ticket in hand for Taipei. There were several foreigners in the crowd, but I was a bit surprised that it was mostly made up early 20s and younger Taiwanese people. From the people I talked to, some where there just because it was a foreign band, but most were actually quite big fans of NMH who had discovered them through friends, or online, or independently, which in my experience makes for a cool and enthusiastic fan base.

Sebadoh opened (read about it here) and were good, but really, you could tell that people were just chomping at the bit for NMH. I have never been to a show where I’ve felt more anticipation. Even the super cool kids who wouldn’t even blink if Thom Yorke walked by were getting antsy and anxious and excited. NMH took forever to set up as they had tons of equipment — so many horns and accordions and guitars and saws and keys and even a wee little light-up lamb sitting in the back. And when they finally took the stage, I was just like, “Holy shit. That’s Neutral Milk Hotel. That’s really Neutral Milk Hotel.” It was strange. It was them, and they were onstage, and it was strange and unreal and wonderful.

Then they started playing and here’s the shocker: they sounded exactly the same.  Jeff Mangum’s voice is nearly identical to how he sounded on Aeroplane. I couldn’t believe it. Perhaps because he hasn’t been performing regularly over the last 15 years? Maybe he’s been living really well and so there’s no vocal degradation? I have no idea. But if you’d listened to their live performance in Taipei and compared it with a performance from the 90s, you wouldn’t be able to tell the difference.

As for the rest of the band: so full and rich and energetic. It could not have been better. Again, I know I’m not objective when it comes to NMH. And before the show I kept telling myself, “Don’t get your hopes up.” But you can’t help but get your hopes up when seeing an act like them, after so long, and after they’ve been so influential. It’s impossible. And I was just astounded that they not only sounded the same, but they sounded better. They were flawless in exactly they ways they should have been. The guitars are still so fuzzy but the horns are amazingly crisp and sharp, and then you mix in the accordions and percussion and various other instruments and it was better than a symphony.

I’m not unbiased, but it was the best performance I’ve ever seen (BY FAR), for a number of reasons. First, the crowd was great. I was right up front against the gate because there’s no way I’m going to NMH to see them from the back of a venue, and shows are just different when you’re standing as close as you possibly can to a band. I don’t know why, but the position is vital. And even though the venue was quite big, the crowd was maybe only 200 people (which brings up the issue of them being under-promoted and undersold in Taipei, which is a whole other issue not for right now, but seriously, in Shanghai we have promoters who I think could have done better). The crowd was small but it was people who were having a dream realized, all together, at that very moment. As soon as they started playing their first song, “King of Carrot Flowers,” I told myself, “Don’t sing along. Don’t sing along. Don’t sing along.” But as soon as Mangum started singing probably every one of us was singing with him. It couldn’t be helped, but it was a defining moment — hearing 200 overexcited people singing a song they never thought they’d get to hear live by a band they never thought they’d get to see.

Also, their sound was phenomenal. I expected degradation. I prepared myself for it and I was going to be okay with it because no one is frozen in time and nothing is ever going to be as great as you imagine it will be. Except, I learned, Neutral Milk Hotel.

And this show tops my list for another reason. You know when you go to see your favorite artists because they’re touring because they’ve got a new album out? And maybe the new album’s kind of shit but you love their old stuff so you go and sit through the show and listen to the new mediocre stuff just so you can hear your favorite song for 4 minutes during the encore? Yeah, none of that shit with NMH. No, they’re not releasing new stuff. No, they’ve got no new songs. But what this means is that every single song they played was one that most everyone in the audience had already heard and already loved. It was like creating a NMH mix tape of all your favorite songs and then hearing them play it live. Unreal. Completely unreal. Here’s the setlist:

So let’s say you’re even just a casual fan and have maybe only ever heard Aeroplane, the setlist is still chocked full of song after song that you know. And let’s say you’re someone like me who has the albums and every EP you’ve ever been able to lay your hands on. You’re dying right now, right?

So yeah, it was the best show I’ve ever seen. It was just the perfect combination of everything that you need to make a show go right, and they had it all. Plus, NMH was incredible humble and thankful and almost acted surprised that people were going absolutely apeshit that they were there and playing. They weren’t overtired and didn’t look bothered to be there (but let’s check in on them again in 6 months time towards the end of their tour). The chatter from the band was minimal, except to thank everyone for coming and telling us how great it was we were all there. Will they be able to maintain that for this entire tour? Who knows. But it worked that night.

By far, the best moment for me of the night was Mangum’s solo version of “Oh Comely.” The rest of the band left the stage, lights low, audience was dead silent, and he sang a pitch perfect rendition of one of the saddest, most beautiful songs I’ve ever heard.

Everyone left on a high. Like, a drugged high. We were dizzy and buzzy and the night was warm and dark and it was late but everyone was so still wound up. It really did feel like I was coming down from something. Dumbstruck. During the show, it was almost like if we talked too much or questioned anything it would break the spell and NMH wouldn’t actually be there at all. So it wasn’t until after, as everyone was pouring out that people started talking and sharing and saying “wow” over and over and over again.

I don’t have any pictures from the show (the one above comes from a different night). Mangum made a plea at the beginning not to take any, and I’ll be damned if we didn’t all agree. I know he’s quite a private person, and honestly, I was just thrilled to be there, so I didn’t even try to sneak a furtive snap or two. But I might come up with something later, so I’ll update with pics if I do. Until then, I’ll just describe each member so you can imagine what they look like.

First, Jeff Mangum has a lot of hair and a big beard. Like, Duck Dynasty big. I would not have recognized him had I not known who he was. Also, he’s taken to wearing caps and sweaters and whatnot and how he doesn’t die onstage from heatstroke remains a mystery.

Julian Koster has sold his soul to the devil because he looks and sounds exactly the same.

Jeremy Barnes has a super thick, 70s-gay-club-style ‘stache, and it is amazing. He is also still fabulously thin. Possibly in cahoots with Julian and the devil.

In addition, there was also a guy playing with the band on various instruments: occasional horns, the guitar, and the electric bagpipe? Or whatever the bagpipe-y instrument is they use on “Untitled.” And there was a woman with them as well who was on the guitar, accordion and keys occasionally.

I would just like to let NMH know that if either of these people should fall ill or meet an early demise, I’m available. I know 11-12 chords on the guitar, can play the French horn really well (or so my mom always told me) which means I can basically play anything brass, and I’m moderately proficient on the piano and accordion. Also, I know every song you’ve ever done and will work for free. Available immediately. Just putting that out there, NMH. 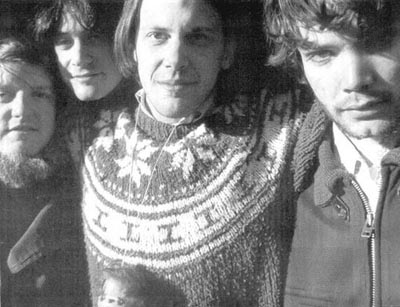 Update: To read about the Tokyo show and watch the opening song from their show, go here.