390 Panyu Lu is a newish live house/gay bar in Shanghai. The performance area is quite small, but the sound is good and you can get up close and personal with everyone. I reckon some people don’t like this. I do. Technically, yeah, it’s a gay bar, but they’ve been hosting some really good bands, DJs and musicians since they opened so it’s attracting a mixed crowd. Plus, drinks aren’t terribly expensive, so it’s good all around. 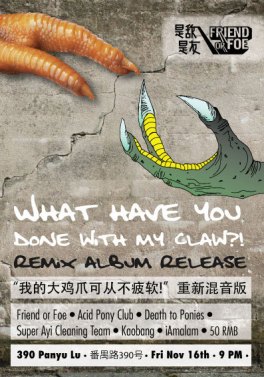 Point is, last night I was there for the release of Friend or Foe‘s album “What Have You Done With My Claw??!!” Though it’s not technically a Friend or Foe album, really; it’s actually a collection of remixes local DJs and musicians have done of songs from Friend or Foe’s album from last year called “My Claw is Never Limp.” But it’s kind of lame to have an album release and have a crowd stand around and watch someone press play on their Macbook (I’m looking at you, DJs) so Friend or Foe played live and we all got copies of the album.

There were actually a few bands playing. Death to Giants played and sounded good. Then there was…uh…

Here’s the thing. 390 is split into two areas, really, so when you come in you can sit and chill with your friends and watch the performances on TV monitors while still having a conversation. So when I came in I saw some people I knew, sat down, started drinking and really didn’t move till Friend or Foe started playing. So really, the others on the bill? No idea. I’m sure they were all lovely. 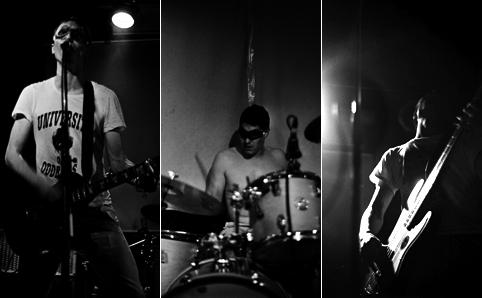 Friend or Foe (photo from CityWeekend)

But I did definitely see Friend or Foe and all was good–their typical brand of loud, punkish, goofy rock ‘n roll. This is another band that I’ve seen playing for a while now, and was never really wowed by, but then sometime last year they suddenly (or probably not so suddenly, from their perspective) got good. Magic. Or maybe practice. One or the other.

I do wish they would lose the costumes, though. Well, some nights I’m into it, some nights I’m not. I feel like they have the chops now to bring in people without a gimmick , but then again, maybe they just like dressing up. Can’t knock them for that.