I am a fairly massive Led Zeppelin fan. In fact, the title of this site comes from a somewhat mediocre Led Zeppelin song, but come on — they can’t all be winners (besides, titles like Ramble On, Black Dog, Kashmir and Out on the Tiles were all taken looong ago in the blogging world). However, for most of my musically-aware life, I was only a minor Zep fan, mostly because I’m not old enough to have experienced them in all of their 1960s-70s glory. It wasn’t until later when I started systemically working my way through their discography that I actually began to see why they were considered one of the pivotal rock bands of the 20th century.

I always thought that the number of their bitchingly awesome songs (Kashmir, Stairway to Heaven, Achilles Last Stand, Whole Lotta Love, Ramble On, Immigrant Song) outweighed their sucky songs, and this was especially clear to me after I read a biography of the band called When Giants Walked the Earth by Mick Wall (2009). It’s pretty massive and really, really detailed. In it, Wall goes into incredible detail about how Led Zeppelin (mostly Jimmy Page and Robert Plant, but with strong input from John Paul Jones, who was a stellar studio musician since his teens, and John Bonham, greatest guitarist ever) wrote their music and frankly, it’s incredible they got any good songs at all. They’d just all be sort of sitting around and then the record company would call and say, “We need a new album in 4 weeks,” and they’d be like, “All right.” And off to their little cottage or where ever, where they’d stay up all night and fiddle around with their instruments and just come up with an entire album in like, a week. 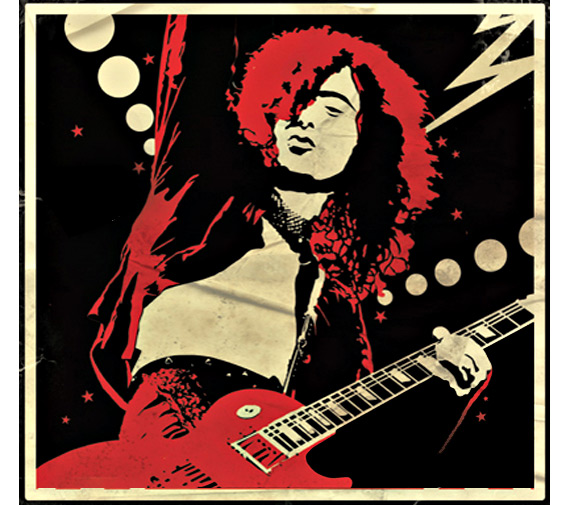 It also struck me how incredibly astute and devoted Jimmy Page was at such a young age when he was going around and putting Led Zeppelin together (I think he was 19). He knew exactly what he was doing but to have that much talent and ability at his age and not to completely self-destruct after they became wildly successful is amazing. The book also has a lot of detail about their tours, but oh my god, to be a fly on the wall during those massive American and European tours they would do — when they were one of the best-selling groups in the world, and so breathtakingly good-looking and in their early 20s. The things that probably happened. I would read a book filled with nothing but that amazing filth.

The book made me really appreciative of Jimmy Page’s talent, and also reconsider him as more of a “musical magpie” rather than someone who ripped of old Yardbirds riffs. Also, I didn’t know this, but it was widely considered that John Bonham was basically a musical genius on the drums. Who would have thought? A drummer!

After finishing the book I had to go and re-watch the Led Zeppelin documentary concert film The Song Remains the Same (1976). The non-concert parts of the film are super-weird; I thought that before I read the biography and I think that now. It’s got these strange fantasy sequences where the band members and their manager, Peter Grant, play gangsters and househusbands and knights wandering around in the woods. It’s…odd. But the concert footage — taken from several concerts at Madison Square Gardens in 1973 — is absolutely amazing. It is Led Zeppelin in all their glory. And Jimmy Page does so much live that you never hear on albums. Really amazing.

I also recently watched this really excellent documentary on the electric guitar called It Might Get Loud (2009) with Jimmy Page, Jack White and The Edge.

I know, a documentary on the electric guitar doesn’t sound that awesome, but it’s told through these three guys’ experiences with guitars, so it’s actually really cool. The Edge I couldn’t care less about, but Jack White and Jimmy Page are awesome and pretty much at the top of their game. In fact, there’s one scene where the guys are sitting together in a warehouse, talking, and Jimmy starts to play a Led Zeppelin song. The look of complete and utter adoration on Jack White’s face is exactly the same way I would gaze at Page if I were to ever hear him play in person. It’s adorable that even someone like Jack White gets awed by Jimmy Page.

So all of that is a long-winded way of saying that I’m a huge Zeppelin fan so I keep my ear to the ground for Zeppelin news, which is why I was sort of excited to hear that Robert Plant made some sort of offhand comment about how he was free in 2014 if Jimmy Page wanted to reunite Led Zeppelin.

It’s pretty common knowledge that Plant has always been the main deterrent for a full Led Zeppelin reunion. Led Zeppelin was Page’s child, and to be honest, Plant didn’t even contribute all that much at the beginning except being really good looking and a good vocalist. But because of Page, Plant eventually started contributing and really helped make Zeppelin what it became even though Page remained the driving force behind most of the best music and shows. I think when Led Zeppelin was coming to an end — after Bonham’s death — Page wanted to pursue it — to never let Zeppelin go, while Plant was getting over it and wanted to try new things. I think Plant saw himself as having a lot of other options, while Page though Zeppelin was the only thing they should do.

And Plant did go on to do other things, and even though his solo work was mostly blah, he struck gold with his album with Alison Krauss called Raising Sand (2007). If you haven’t heard it, hear it, because it’s phenomenal. Here’s the thing, though: Raising Sand came out and was just fantastic and people were like, “Oh, this is what Plant is doing now!” but there was never anything after it. Plant and Krauss tried to record a follow-up, but it never materialized and both have been somewhat evasive about what happened. Plant’s released solo stuff since then, but it hasn’t gotten the same acclaim that Raising Sand did (same goes for Krauss). You hear the music biz whispers but no one’s entirely sure what went down.

So maybe Plant is just coming to a place where he’s bored with his solo stuff; maybe he wants the cash that a Zep reunion could generate; maybe he just misses the Zeppelin days. Who wouldn’t? But whatever his reasons, suddenly he’s down with Zeppelin again.

I honestly don’t think Led Zeppelin should fully reunite and do the whole tour and new album/new material thing. It’s never as good as you remember, you know? At this point the fans have blocked out all but the best. I haven’t actually read anything about them working on new material, and I have mixed feelings about that. But I do like the idea of a couple of reunion shows, just for the nostalgic among us, kind of like they did in 2007. John Paul Jones has been pretty much working steadily as a musician since Zep broke up but I’m sure he’d be open to it. And for drums, I’m not a purist so I don’t think it would have to be Jason Bonham but if it was, great.

So reunite already. Zep gets a few shows, loads of publicity and a lot of cash, and I get to live my Led Zeppelin fantasies. It’s a win-win, people. Though most likely if I did finally get to see them live, it would a lot like my Rolling Stones experience, which went like this.

Update: Read the Clinton Edition of the reunion rumor here.