Dudes, I was SO THRILLED when a record shop opened up in Shanghai (What up, Uptown Records! Hope you’re still around). And I was also really psyched when they started recognizing Record Store Day, which is kind of just this made up holiday to celebrate independent records stores because people who still buy vinyl think very highly of their musical tastes/views/abilities and can generally be insufferable when talking about such subjects (I may be guilty of this myself), and why not create a holiday supporting that? But in general, Record Store Day in Shanghai was pretty cool because it was just an excuse to hang out and drink in a bomb shelter during the day while listening to some live shows and thumbing through a lot of different albums.

Since I am just recently repatriated to the good ol’ US of A, I actually had no idea if RSD was a real thing audiophiles were into or not until I got here to Austin: a place that probably has more independent record stores per capita than anywhere else in America. I have no statistics to actually support this statement – I just see a whole bunch of record stores when I’m out walking around, so…fact. But apparently Record Store Day is a pretty big deal here, which seems more or less in line with Austin’s music vibe.

The main draw for me on RSD are the free shows. Seriously, y’all, FREE in-store performances from local bands.

The main draw for normal people is that record stores are generally a nice place to hang out on a Saturday afternoon, especially if there are a lot of like-minded people about with some snacks and drinks.

This year’s RSD ambassador is Dave Grohl, all-around-cool-dude, and he has no ceremonial duties other than getting a awesome button with his face on it. And the Foo Fighters are releasing a new EP in honor.

So yes. Record Store Day is a good deal all around.

If you’re still in Shanghai, head to Uptown to browse the fairly impressive vinyl collection and listen to some local bands play full volume in a 10×10 room. They sell record players too if you get inspired. In years past there were t-shirts and vinyl singles from local bands to be had and I hope they still have a bar in there. If not, there’s a Kedi across the street.

If you’re in Austin, jeez, you’ve got a lot of choices. I say pick the store closest to you and it’ll be fun no matter what. Full listing of participating Austin record stores here. If you live somewhere else other than Shanghai or Austin, well, you’re still in luck. Find your local independent record store here. Do512 has an easy listing of all things happening for Record Store Day in Austin right here. Come on, you can see the Ting Tings FOR FREE, PEOPLE. 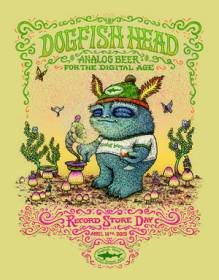 UPDATE 4/16/15: I was feeling sentimental and looked up Uptown Records just to see what they had going on, and it’s gotten so big they’ve moved the event this year to Dada. So head there instead. A mix of DJs and live sets and plenty of booze, so…perfect.