If you’re someone who lives abroad for a significant amount of time (interns and study abroads don’t count, dude), every year you have to say goodbye to people. People show up with really grand ideas, give it a go, and then realize that they’re living in China and get the hell out of here. But once in a while people show up, things work out, and they do cool things. For a while, at least. And then they leave, too. Whatever, man, I get it. I’ve been here a long time.

So it sucks to say goodbye to your friends (every year, constantly), but it sucks even more when those friends are in cool bands that you really like. But such is life. Such. Is. Life.

Friday was the last show of Death to Giants, a cool drum and bass duo who really hate Jared Leto that I’ve been going blah blah blah about for ages now. And I was always going on about them because they’re really good. They stood out in the scene here and they would have in other cities as well. But you should have seen them while you could, because now it’s too late. They’re over for totally normal, boring reasons in this town: one band member is moving somewhere else. Such. Is. Life.

Their final show kicked off at Yuyintang with a performance from Death to Ponies, which is the collaboration of Death to Giants and the boys from Acid Pony Club (and if you’ve never heard the Horses play, you’ve clearly never been out in Shanghai). It’s been ages since I’ve seen Death to Ponies, and I kind of forgot how awesome they are. It’s weird, because drones make me feel really funny inside so I haven’t really listened to their album much at home, but listening to them live is the shit. It just feels so good in the club. It’s weird, man. Weird. 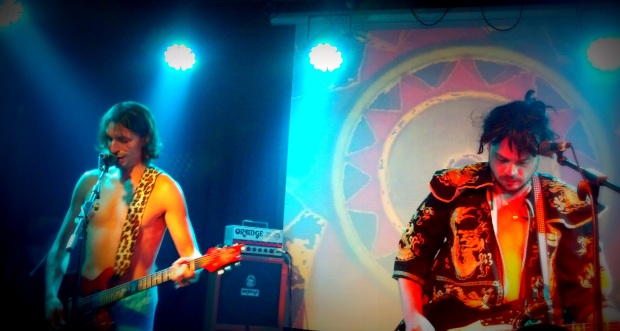 Friend or Foe also gave a good performance, per usual. New album coming out soon-ish from them, and their new stuff sounds pretty good.

And of course Death to Giants pulled it out. They’ve always had a stellar live presence, which is one of the many things that elevated them above other live acts in Shanghai. Plus, their music — this really addictive pop/metal/humor combination — was just so much fun to listen to. And see. I just liked everything about them. Plus, the guys in the band are just cool guys. So basically, everything about them was great. And now they are no more!

So of course it’s sad, but it was a really good show all around and a fine performance to go out on, and Yuyintang was packed with people who loved it and had supported Death to Giants since their beginning. I honestly wish I could’ve hung around all night but I had work the next day so didn’t get to congratulate (or wallow) too much.

But every time a good band dissipates (RIP Boys Climbing Ropes and Rainbow Danger Club) it seems like another one springs up, sometimes new, sometimes just under-appreciated, and sometimes from the ashes of bands past, so there could be other new things coming soon.

Finally, here’s one last track from DtG for all of us who acknowledge just how miserable our lives in Asia would be without Family Mart.

Updated: Thanks to Chris (of numerous bands) for the video from Friday night!