I was born about 40 years too late to get on the original Led Zeppelin train, but that’s never stopped me from being a huge fan. HUGE. But because I’ll never see Led Zepp together and young and at their peak, I’ve had to satisfy myself with the surviving members as solo artists and a slew of remastered records (thanks, Jimmy Page!). But you know, still it’s been pretty good. And I know this because I saw Robert Plant perform at ACL Live, he sounded fantastic, and he basically sang his entire show right to me. 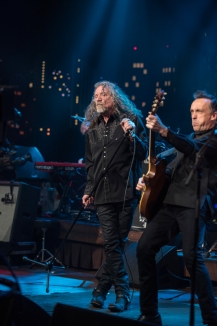 First, you should know that I go to a lot of ACL shows. It’s a perk of being part of the music media. And normally they stick me way up at the top and to the side because nobody cares about me and that’s kind of okay because it’s free and I’m just happy to be there. But when I found out that Robert Plant and The Sensational Space Shifters would be performing, I made it my life’s work to get as close to him at that show as humanly (and legally) possible. My editor called in every favor to every person he had ever met because I might have threatened to burn the city down if I didn’t see Robert Plant. And you know what? It totally worked! I got into the impossible show to get into and I was front and center. And it was worth it in every way.

Robert Plant still sounds phenomenal live. I was prepared for him not to, because I’m a realist, no matter how much I love Led Zeppelin. Plus, his post-Zeppelin work has been much more low key, as far as vocals go. But he sounded amazing. He can still hit the high notes just as strongly as every. He still sound sexy and emotive and has one of the best rock voices in modern music, then or now. The man sounds good.

And he still has such an amazing energy and presence on stage. Everything about him was great. It was a once in a lifetime show. I got so incredibly emotional when I heard the strains of “Black Dog” start up. I might have been the only one who has ever cried during that song but it was JUST SO GOOD. It was as close to hearing Led Zeppelin as I every am going to hear, and it was amazing. Honest to god, it felt like he was singing his entire show directly to me. Probably because he most likely was. Seems logical.

On top of getting teary with every Led Zeppelin song Plant did, I was also standing next to Charlie Sexton. I kept seeing him in my peripheral and thinking, “OMG! That’s Bob Dylan’s guitarist! Right there! Standing right next to me! And he loves Robert Plant as much as I do!”

It was quite the night.

You can watch Robert Plant’s appearance on ACL here if you’re a member of KLRU, or on YouTube if you’re not. Keep an eye out for the redhead sobbing during Plant’s rendition of  “Whole Lotta Love” because that’s a totally normal thing to do.

The Lemon Song
Rainbow
Black Dog
Turn it Up
Spoonful
In the Mood
No Place to Go/Dazed and Confused
Babe, I’m Gonna Leave You
Little Maggie
Fixin’ to Die
I Just Want to Make Love to You/Whole Lotta Love/ Hey! Bo Diddley

Rainbow (repeat to make up for a mistake in the original playing, which I totally didn’t notice)
Satan, Your Kingdom Must Come Down/In my Time of Dying
Rock and Roll

Robert Plant and the Sensation Space Shifters performed for Austin City Limits on March 20th, 2016, at the Moody Theater. The episode was released on October 15th, 2016.