Holy shit, there’s a lot going on on Saturday.

There’s a new Shanghai La Jiang You party on over at Dada and I love these parties–the music is usually like deep techno (is that a thing?)–like really hard house music–and are so much fun. Ben Huang is going to be playing obviously but also Bobby Peng, a legendary Shanghai DJ. Oh, gonna be so much fun. Dada’s amazing. Cheap drinks, no cover. 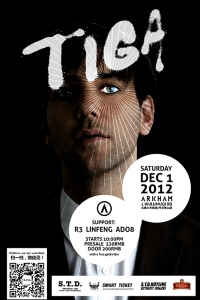 Then of course there’s the big opening of Arkham from S.T.D. which is going to be MENTAL. Montreal DJ Tiga is playing and I’ve never heard him but he’s supposed to be awesome. I went to Arkham (though it wasn’t Arkham then) for Halloween and it seems like it’s going to be a good space. Underground, so the music can just be massive but not quite as claustrophobic as Shelter. It’s 120 rmb but I’m sure it’s gonna be worth it. And at Halloween, not too many people were smoking which was quite weird at a club here but great for those of us who don’t smoke, then I found out afterwards it’s because no one could get a cigarette to stay lit–like maybe it was too damp or something? Whatever caused that problem, I hope they didn’t fix it. 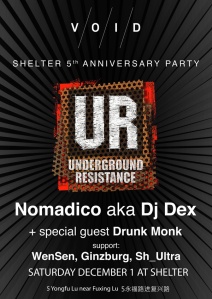 Speaking of Shelter, it’s its 5th anniversary on Saturday! Oh Shelter, has it been five years already? They grow up so fast. So much goodness (and complete debauchery) has been had at Shelter. Maybe the best club in all of Shanghai. It’s hard for me to even imagine the city without it. Apparently VOID did the opening party there 5 years ago and now they’re back with the same crew–namely DJ Dex/Nomadico playing some old school Detroit techno. Oh, legendary. And only 60 rmb.

And to top it all off, YYs is also celebrating its 16th. Wow. YYs. They used to have some legendary parties there, back in the day. This was way before my time, but it’s still upstanding, man. I basically live there. Expect some classic Shanghai DJs there, with no cover.

All this in addition to the stuff going on with BooshKaBaash.

And…….I’ll be out of town all weekend. I gotta get a new job.