There’s no way my review of Florence + The Machine‘s most recent ACL Live taping will be unbiased or objective in any way, because Florence Welch is one of the best performers making music right now, her band is fantastic, the songs are amazing, and her live performances are 100% delightful from start to finish. Obviously I’m a fan, but I’m a fan with solid reason behind it (unlike, say, my fandom of Billy Joel. Billy Joel sucks, and yet I cannot stop myself from singing along to every. single. song.).

There are so many things I like about Florence + The Machine. The band’s music is dark and romantic, but still very much in the indie-pop vein. At their ACL taping, they had about 10 people on stage — so, the full band, plus 4 backup singers. The sound was very big and complex and substantial. I love the orchestration of it all, but I also like how their songs aren’t overwhelmed by all that instrumentation. They’re grand but still very beautiful and

even simple, at times. Lyrically, they tend towards melancholia, but in a “everything is so overwhelmingly beautiful that it makes me sad” kind of way.

Because of the grandness of it all, Florence + The Machine is more well-known as a festival band where the stages and crowds are big and the bombastic plays well. So it was very interesting to see them in the Moody Theater — a downright intimate venue compared to the likes of the ACL Fest or Coachella — and they still wowed. The sound was good and the songs work in front of small crowds as well as the big ones. Welch reminded me of a woodland nymph — she was all flowing dresses and long red hair and very Stevie Nicks-esque, but her voice was so incredibly all-encompassing and powerful. That voice will knock you on the floor, for sure.

On stage she bounced and twirled and never stopped moving but it was never twee. For someone who is so good in front of gigantic crowds, she was also very adept at connecting with the people right in front of her. She made it a point to address different parts of the crowd; to direct us all as a “hungover choir of angels,” as she said; she twirled little girls in circles who were crowded in the very front to be as close to her as possible. She even got everyone in the audience to hug perfect strangers and to shed an article of clothing to wave around during the encore (but, you know, not too much, because it was TV). ACL tapings are usually the best of the best, if you’re lucky enough to score tickets, and Florence + The Machine was the epitome of this.

I love all her albums, obviously, and really you could start with any and be really pleased with what you get: Lungs (2009), Ceremonials (2011) and her most recent How Big, How Blue, How Beautiful (2015).

And if you just want to tear your heart right from your chest, right now: check out this story and video of Welch and her guitarist visiting an Austin teenager in hospice who was too ill to attend the show. If you don’t tear up when the girl starts to sing along with Florence YOU ARE A MONSTER. 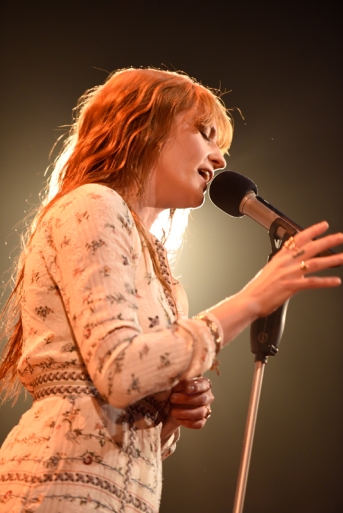 Florence + The Machine are on tour. Obviously I recommend them because they are phenomenal. Tour dates here.

Florence + The Machine recorded an ACL TV Taping at ACL Live at the Moody Theater on April 20, 2016.