Flight of the Conchords

Is it harder to write 5 minutes of stand up, or a 5 minute comedy song?

There’s a fairly standard rule that you need 4-6 laughs per minute in a stand-up routine in order to keep people engaged. This doesn’t mean you have to have 4 jokes a minute; in fact, that’s the mistake a lot of beginning comedians make in that they think they have set up at least 4 standalone jokes a minute during a set, which is most definitely not funny. But aiming for 4-6+ chuckles, laughs or “hah” moments a minute is a pretty good rule of thumb.

But songs are a completely different animal. Songs have a structure you have to stick with. They have choruses and bridges and verses and you’re restricted by line length and rhyming schemes and repetition and a whole bunch of other things that I think make writing a funny song about a hundred times harder than writing a funny joke. So it’s all that more impressive when you see people doing it well, like Flight of the Conchords. This was my third time seeing them live. The first: right before their HBO comedy special, around 2005. The second: in between Seasons 1 & 2 of their very popular HBO show. And the 3rd was last Sunday. So I’ve been watching them over a course of 10 years or so, and they’re delightfully, exactly the same: casual, self-deprecatingly modest, and very, very funny.

Flight of the Conchords at Bass Concert Hall (photo via @brunied)

The venues they play at have gotten a bit bigger (the sold out Bass TWO nights in a row) but their act has stayed charmingly small. It’s still just Jemaine and Bret; they’re still just two New Zealanders who are playing their songs and have no idea they’re so funny. They make a lot of jokes about New Zealand, they make a lot of jokes about themselves, and their banter still sounds completely naturally and mostly improvised (though the best jokes always sound improvised when they’re so well done). They called themselves the biggest band in New Zealand because they’ve got two members (when I saw them the first time, they billed themselves as “New Zealand’s second most popular comedy folk duo,” so they’re moving up in the world!). I don’t want to talk too much about their act because jokes are always best the first time you hear them, while songs tend to build appreciation over time, but they’re both musicians and comedians so it’s best to discover them fresh. They did play some classic Flight of the Conchords stuff, but there were new songs as well. Their spoken jokes and improvisation were all spot-on, obviously, but I’m so happy that their songs still hit that coveted “jokes-per-minute” standard and are still as witty and funny as their older stuff. As they said, “We’re trying out new songs, but we don’t play them very well yet.”

Flight of the Conchords at Bass Concert Hall (photo via @lrngray)

The opener for FotC at Bass was Irish comedian David O’Doherty, a perfect compliment.

They’re on a huge tour right now, and I highly recommend them, whether you’re familiar with their act or not. I think they’re one of the best comedian/musician acts working right now, and they set the standard for how the genre should be done. 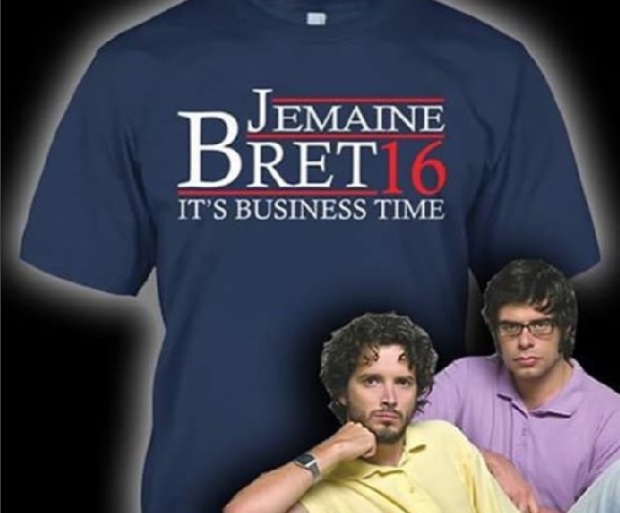 Finally, the 2016 Presidential election has a suitable solution!

Flight of the Conchords performed at Bass Concert Hall on July 10th, 2016.

There was an error retrieving images from Instagram. An attempt will be remade in a few minutes.