I saw Stevens perform in Austin last week, and it is also one of the best shows I’ve ever seen as well.

Opening for Stevens was Moses Sumney. I’d never heard of him and so had no expectations but came out rather impressed. He performs this combination of soul and folk, much of it a cappella, though he did play an electric guitar on a couple of tracks. His vocals were often in a falsetto and he also used a looping pedal to live loop a lot of stuff – both vocals and percussion—which was pretty cool: think clapping, snapping, vocalizations, echoes, beatboxing, etc. to build up songs. I’ve seen lots of people in the last couple of years using live looping and Sumney does it well. It’s nice when you can go in blind to a new performer and come up out thinking, “Yeah, that was pretty cool.” That’s how Sumney left me. You can check out his work on Soundcloud here. 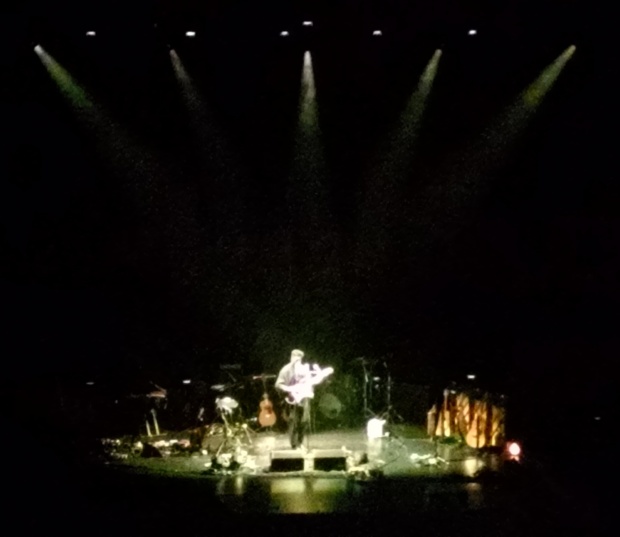 I had also never seen Sufjan Stevens live before but have basically burned through every album he’s ever done, so I had A LOT of expectations. His show still managed to blow me away. If you’ve listened to Carrie & Lowell, it’s an incredibly quiet album. There’s a certain power in how subdued it is, but it’s far less electronic than much of his past work. It’s subtle and understated but extremely formidable in how it actually sneaks up on you. I guess I was expecting a more traditional set up as far as the tour was going for this album – maybe just Stevens with his guitar and uke and banjo, a few band members supporting, a faithful rendition of the albums songs? But his show was so much more.

First of all, the lighting and graphics were perfect. The show started with just Stevens at the piano flooded with this dark orange light. The graphics were also projected onto cathedral windows in the back – such a deliberate and beautiful choice – so even it was just a seascape in the background, there was a certain piousness about it which I think fits Stevens very well.

The first part of the show was Carrie & Lowell almost in its entirety. I’ve listened to the album a lot since it’s been released, so I was feeling it. The song transitions were flawless and the show was definitely a production. Stevens didn’t talk at all during this part of the set and he and the supporting musicians went seamlessly from one song to another, and the graphics and lighting changed with them. What was so great about this part of the set was that his songs were so well-adjusted to live performance and quite different from what is on the album, but in a really remarkable way. For example, when Stevens played “Should Have Known Better,” it started as a pretty soft, acoustic song, and indeed, that’s how it is on the album. But live, instead of fading away as recorded, Stevens builds it until it becomes this larger than life electronic version. Absolutely stunning live.

There were some songs, like “All of Me Wants All of You,” where I couldn’t believe so much sound was coming from just 5 people on stage. And then to go from that song, which ended so bold and brash and follow it up with one like “Eugene” was a particularly good style choice, as that one performed live was very similar to how it appeared on the album, i.e. quiet and subdued. Then during “Drawn to the Blood” I was pretty sure there was either a spaceship on stage that was taking off, or maybe we were at a Pink Floyd laser show. There was just so much variety contained in such a small number of songs.

One of the most noteworthy songs in my opinion on Stevens’ new album is “Fourth of July.” Stevens had a rather complicated relationship with his mother, who passed away in 2012 (and you should read this great interview with Stevens about the album on Pitchfork), and while the whole album is very much about his mother (the “Carrie” in Carrie & Lowell), this song is specifically about her death. On the album it’s very dreamy and poignant and slightly unsettling; live it was fucking stunning. It went from small and intimate to something so big and distorted and loud with Stevens repeating the refrain “We’re all gonna die” over and over and over again that you just kind of had to sit there and let it happen.

The show was broken up into two parts, the first part being most everything from Carrie & Lowell. After the big WE’RE ALL GONNA DIE DEAL WITH IT song, he totally switched directions. Stevens came to the center stage and popped on a hat and then he was seriously chatty. Like, super chatty. And he’s funny, too. Did you have any idea he was funny? I did not. He’s very funny. He talked, finally, about death (hilarious), his strange Waldorf School he went to as a kid, his childhood pyromania, the way his mom was constantly adopting special needs animals and how she believed that animals had past lives just like humans did – hence the name of his childhood pets Princess Victoria and Chairman Mao – and a lot of other stuff.

He then played some of his older stuff, and this was the Sufjan I thought I would see – him on the banjo playing “In the Devil’s Territory” and “To Be Alone With You” from Seven Swans. Then he finished with “Blue Bucket of Gold” from Carrie & Lowell and it was stunning. I keep using that word to describe the show but I don’t feel it was out of place because really, it was stunning. His lyrics, voice, performance and staging were stunning. I’ll be investing in a thesaurus soon.

Obviously people were losing their shit because this is Austin and Sufjan Stevens was made for an Austin audience. For an encore he did “Concerning The UFO Sighting Near Highland, Illinois” from Illinois (amazing, and also he remarked that in order to sing that high he pretends he’s a tiny little seahorse inhaling helium through a straw, which I think is a pretty good view into the mind of Sufjan Stevens), then “That Dress Looks Nice on You,” from Seven Swans, “Casmir Pulaski Day” from Illinois (possibly the most moving song ever written) and finally finished with “For the Widows in Paradise, for the Fatherless in Ypsilanti” from Michigan. 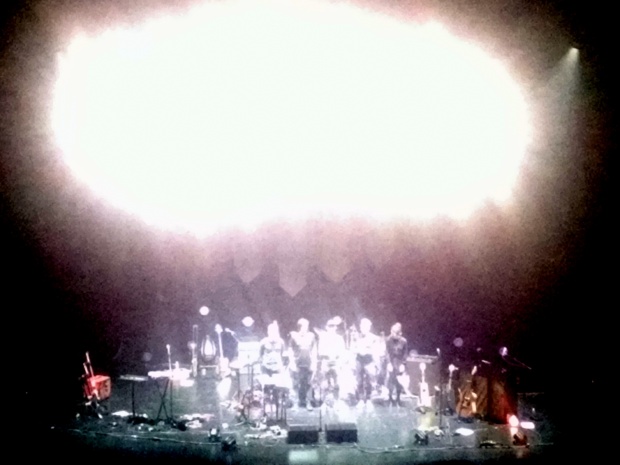 It was probably one of the top 10 shows I’ve ever seen, due in no small part to how much I admire Stevens as a songwriter but now also as a performer. If you haven’t heard Carrie & Lowell yet, get on that, ya turkey.

Sufjan’s on tour most of this year. Check out upcoming dates here.