Sometimes you don’t need music that changes your life, you just need something that makes you feel good. Friendly Fires is that. Not that Friendly Fires can’t be deep; I’m sure those boys have all sorts of depths I haven’t even considered yet. But it’s hard to think “depth” when there’s a serious disco beat underlying your major tracks. But I love them, I really do. They’re so much fun. They played at Mao Livehouse and tore it up. Massively. I’d heard they were a live band and it was very true.

Friendly Fires is Ed MacFarlane, Edd Gibson and Jack Savidge, three young guys out of London (or very nearby) who make this great disco-dance rock that’s fun to listen to but even better to hear in person. And not only do they play great live, but Ed really lets loose on stage. And I love to see people dance unabashedly–just with the passion and fury and a joie de vivre and not be afraid of making a complete fool of themselves. Except that when people dance like that, I never think they’re making a fool of themselves, because they’re fabulous! So yeah, obviously I loved the show. 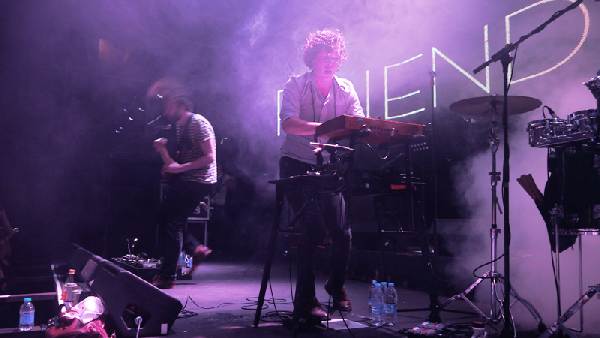 I interviewed Edd and Jack before the show. Read it here, because they have some seriously deep and philosophical shit to say about shit. Haha, no they don’t, and neither do I. But they were cool guys and the bassist was super dreamy and I kept giggling during the interview when he would look all deeply at me (in my imagination, that is). Because I am a professional journalist! Ah, whatever. They were awesome.