DJ Example‘s going to be in Shanghai on December 14th and I’m kinda psyched. I like the big party/dance/club music that he does. A big crowd-pleaser kind of music. Fantastic in a club. I’ve never seen him live so it’ll be cool to see what he does. When his album Won’t Go Quietly first came out in about 2010 or so, I played “Won’t Go Quietly” and “Kickstarts” till they were about worn out (well, as much as you can wear out a digital track) and I liked them so much because they worked at home and they worked in the club with very little alteration. That’s some good electronica right there. 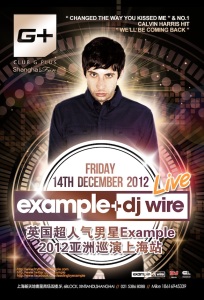 His new album is The Evolution of Man through Ministry of Sound so I’ll have to check it out before he plays.

It’s gonna be cool, I think. He’ll be at Club G+, which is where Skrillex played, so they continue booking the big name DJs. But tickets will be a much more understandable 180rmb, which means I won’t bitch and moan (as much) about how much it costs to see some dude push play on a computer. I recently saw Example on Never Mind the Buzzcocks and he was super-geeky. Exactly how he looks? That’s exactly how he is. So that was cool.

DJ Wire will be with him and I’ve no idea who that is. I’m sure he’s lovely.

For those of you in Shanghai, you can get your tickets at SmartShanghai.

Copyright © 2020 Create a free website or blog at WordPress.com.