The Wooozy Sessions is a concert series from Wooozy.cn with the cooperation of Shanghai’s independent livehouses. They promote local bands and give them a platform to perform, and they also bring in bands from other parts of China who have not yet had the opportunity to play in Shanghai.

Saturday was Wooozy Session #10 at Yuyintang as part of the JUE Music + Art festival. I like live music of nearly every kind, but I was particularly excited for this session because it was sort of the local showcase part of JUE and had some good bands playing. 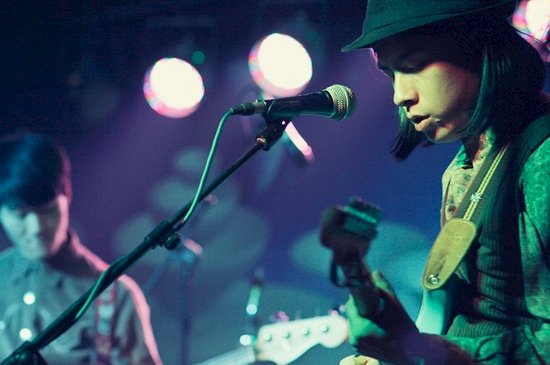 First up was SVRO (aka Sarcastic Voice Rang Out aka Himdong aka Flower Stir aka blah blah blah (I made that last one up)). I believe I already ranted about their name in an earlier post, but I’d never seen them actually play. They were good. Just a guitar and drums outfit, but the guitarist had a looping pedal which I loved, so he would start something, loop it, then build from there. His riffs were particularly strong, though the vocals were weak. They actually started off pretty weak overall and I didn’t have high hopes, but as they got into they got much better. Their stage presence needs a little work — a little polishing — but all in all I liked what I heard. Sort of an experimental/dreamy/prog rock sound. Also, the Chinese girls in front of my kept saying in Chinese how cute the drummer was (he also plays in Pairs) and that’s always a good seal of approval.

Side note: whenever I get to a show and there are loads of local college students there, I know the band we’re going to see will either be super cute or super hip.

Anyway, I liked SVRO and am looking forward to what they’re going to do in the future. Another side note: after the show I was waiting for a taxi and the drummer from SVRO totally let me cut the taxi queue even though he was there long before me. So, there you go: good band and very polite. Though he did laugh rather gleefully when the first taxi I tried to get into was locked and the driver just drove away as I was trying to open the door.

Update: Was just informed by said drummer that he was only temporarily filling in with SVRO so that Himdong could play the show that night, which explains the slightly awkward song transitions. Hopefully SVRO finds a new drummer soon!

Next up was Feima, a newish band here in Shanghai. They used to be more of a Carsick Cars cover band, but I think that they’ve worked up their own material (pretty sure I heard new stuff) and are now a proper band in their own right, and getting pretty damn good. Possibly the band that all the college girls came to see. They sang mostly in Chinese but had a bit in English which was pretty cool. I’d describe them as indie rock, with a little bit of that Beijing punk influence.

Side note: their name translates to “barking horse” which I think is awwwwesome.

Then we had Astrofuck, who filled in for Chinese Football. Chinese Football is this band out of Wuhan that I was really looking forward to, but they couldn’t make it; no idea why. But Astrofuck was a good replacement. They’re a group from Shanghai that does electro punk stuff, so they have a guitarist, a vocalist and a guy with a soundboard. To be honest, their music is not my thing when watching a band. It’s more something you would listen to in a late-night lounge that you go to after the clubs have closed but you just don’t want to go home yet; you just want to sit in a booth with a drink and close your eyes for a bit. They’re interesting, but I find their lyrics a bit monotonous (which I pretty sure they’re supposed to be) and overall a little drone-y. They’re a good band, just not my style. Also, I don’t like it when lead singers smoke onstage. Unless you’re in The Police and it’s 1983 there’s no reason to have a cigarette on stage. So bad for the vocal cords! Is it just to look cool? Because smoking’s not cool, kids. Or it it because you can’t do a 20 min set without a smoke? I don’t get it.

Side note: how cool was that Police video for Every Breath You Take where the smoking ashtray turns into the snare drum at the beginning? And then Andy Summers has a burning cigarette stuck in by his tuning pegs on his guitar? So cool. But not smoking kids, not cool. Not 1983 anymore.

So last was Rainbow Danger Club. Always good. They played a lot of new stuff and I would like to give a legitimate review, but at that point I’d had a lot of beer and you know, I wasn’t taking notes or anything journalist-y like that, so let’s just say they were awesome and leave it at that. They’ve got a new album coming out April-ish. Very psyched for that. People love them. They have to do encores when they play. That kind of band. I think they’ve pretty much added the cello to their band entirely now, which I think is a good choice. It’s pretty rich. And the trombone. That was new.

Sadly, this might be the last Wooozy Session for some time, or ever forever. They sort of brought this session back for the JUE festival, but I don’t think Wooozy.cn is going to be able to continue them. Super sad, because they’re such a good showcase for the local talent.

Oh my god, once again I forgot the best part. Towards the end of their set, Feima sort of mixed things up, and I saw the guitarist pull out a MELODICA. What more proof do you need, people, that this instrument is SWEEPING THE CONTINENT. Sadly, he did not play it. I took a picture anyway.