God bless the pre-sale, because if I had not already bought tickets for The Lumineers at Mao this week, I would have missed them.

Tuesday was absolutely miserable and cold and snowy (!!) but I was psyched for the show because 1.) The Lumineers are hitting all the right spots right now with their indie Americana folk rock, and 2.) they’re from Colorado so I was obligated. The show was sold out a couple of days in advance which was awesome (when I have tickets, that is) because it is still hard to get small to mid-range artists to Shanghai so every time a good act gets here and is well-received, it means more good acts should follow. So, good. Well done, Split Works. Foretells of good things to come with this year’s JUE Festival.

Here are my feelings about Mao Livehouse: I like it less and less every time I go. Really. I feel bad saying that, because it could be a great venue, but I do. It’s the little things, like their absolutely shitty and asinine ticket system at the bar. They must have some reason for doing it this way, but there’s no way it’s a good enough reason to excuse the lines and confusion that build from the fact that you buy a ticket at one spot, then move down the bar two feet to give that ticket to someone else for a drink. It seems like it would work in theory, but don’t let them tell you how much drinks cost when you buy tickets, or how many tickets you need to get the drink you want, or even what they sell at the bar. Noooo…that would ruin the fun. And having a single queue system at a venue this size is dumb. It’s just dumb. Even with two bars. Still dumb.

Also, the whole coat check situation. For big shows (but shows that are well within Mao’s capacity) they always run out of space at the coat check. Always. And it’s just kind of amateurish. Other venues manage to make it work (and you want to know how? They use plastic bags. As long as our stuff doesn’t get lost or dirty and we get it back at the end of the night, no one cares where it’s stored during the show. It’s what EVERY BAR EVER does on New Year’s Eve. Mao should really look into that). These do kind of seem like small, nit-picky things, but honestly, it’s just kind of lame to go to a show and end up wearing your massive winter coat all night long and having to queue at the bar for nearly 30 minutes for one beer. Come on, Mao.

And sometimes the sound at Mao is embarrassingly bad. But it wasn’t for the Lumineers so I’m not even going to mention it.

Anyway, doesn’t matter that a third of us had to wear our winter best and tee-tole it. The Lumineers were playing! And they were so good. Here’s why I liked them so much: 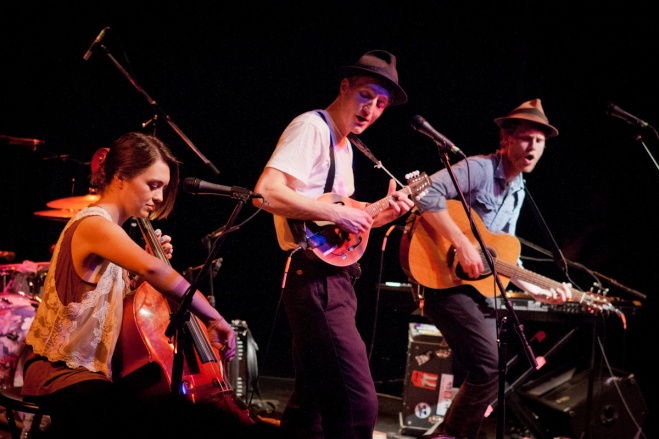 The Lumineers (photo not by me & not from Mao, but they basically look the same)

1.) They sound as good live (actually, in my opinion, better) than recorded. This is the major complaint I have with over-produced music (like mainstream pop and hip-hop). It’s not that the music isn’t good — it’s just that it’s really hard to reproduce all that production in a live setting. You can basically just play electronic tracks and then add a live person, but the vocals in live pop music are never as good as produced ones, so the shows are never going to sound as good as the albums. But with a band like the Lumineers, even though their album was obviously well-produced and polished, they sound better live, because all the musicianship from their album is still there, but you have the added dynamic of the people on stage actually making it while you watch. That’s cool. It’s not just a track for track reproduction of what you’ve already heard; instead you get all the vibrancy and imperfection and variation of live music. In short: they can play their instruments well and I am impressed by that.

3.) Yeah, they encourage you to sing along at their shows. There used to be a time when I would go to shows and silently fume while people sang along, all the while thinking, “I’m not paying to hear your screechy-ass voice.” That changed for no reason in particular and now I feel that everyone should sing along all the time. Live shows aren’t about hearing the album note for note. They’re about seeing people who make music live and hearing it in person and being around people who like the same things as you and getting excited and sometimes that excitement turns into song.

4.) They were energetic and up on the piano and down on the floor and clapping and talking and just generally being cool people.

Here’s what made me go “meh” during the show:

1.) Lead singer/guitarist Wesley Schultz said they they used to play a lot of house parties and small shows back in the day, so he wanted to hop down from the stage and do some unplugged stuff in the audience (and people I know who have seen them play before told me they do this a lot). So the band came off the stage and into the center of the audience to play. And I’m sure this was a super cool experience for those people who were standing around the band as they played a couple of songs in the center of Mao (and possibly the people in the balcony who could see as well). Really super cool. For those few people. But pretty much everyone else was like, “huh,” because, you know, the band is the same height as the audience so no one could actually see them. Actually, not true: I could kind of see Schultz through the camera on the mobile phone of the person in front of me. He stood on a chair at one point, I think. Also, Mao was really crowded so really, anyone a bit back couldn’t really even hear them playing. So it was sort of lame for some of us, but really cool for those people in the middle, I guess. The guy behind me said, “This is what the stage is for.” I agreed.

Where is the band, exactly?

Oh, there they are. Thanks.

Side note: Every person I know in CO claims to have seen The Lumineers play at at least one house party at some point between 2008-2011. I naturally assumed they were all dirty, filthy liars, because I know them, but perhaps one or two of them actually have.

2.) The mobile phone thing. Okay, so several months ago I was listening to an episode of All Songs Considered and Bob and Robin were talking about the ubiquity of mobile phones at concerts today. One guy was like, “It’s cool,” (I think Bob) and Robin was like, “It’s horrible and ruining music,” but the reason they were talking about it was because recently The Lumineers had stopped during a performance at the Newport Folk Festival of their most popular song, “Hey Ho,” to tell people (in a nice way) to put their phones down. I found this appalling. To stop a song after you’ve already started to tell the audience to put their phones down?! Horrifying! Tell them before the show, in between songs, put it on the tickets or the posters or have the venue make an announcement that they don’t want photos. But please don’t stop after you’ve started a song.

But I’ll be damned if they didn’t do the exact same thing at the Shanghai show, which makes me think they have to do it at every show, which makes me think that they like the fact that people are taking videos and then they get to plead at every show, “Hey, just experience this moment with us,” and seem really deep and stuff. It seems like if they really wanted people not to, they would just ask people not to do it before the show starts, right? It’s a bit weird.

I think fighting against mobile phones at shows is futile. Everyone’s got one, and a lot of people are going to use them, for whatever reason. But nobody wants to stare at this the entire show:

I actually wrote a column recently for City Weekend about this, and here’s what I think should happen: if the band wants no phones used, make that clear at the beginning of the show. In general, people are going to respect that. A few will still take furtive photos, but they’ll be far more discreet and fast about it, as people should be anyway. This is how Neutral Milk Hotel handled it and there was no one walking out of those shows saying, “Gee, I wish I’d used my phone more.”

If the band is cool with pictures, maybe make the first two or three songs the photo/video songs, and then after that tell people they have to put them away (this is actually fairly standard with professional photographers at rock shows). Either one of these would be a good compromise rather than stopping a song after you’ve already started. Oh, to hear the opening bars of “Hey Ho” and then have that ripped from you! Please stop that, Lumineers. You’re breaking my heart.

Great show overall though, and I know this because they also did a cover of Bob Dylan‘s “Subterranean Homesick Blues” and I got ready to scoff and not like it and everything and then I had to admit that it was actually kind of good.  The show was promoted well, sold out but not packed, and the sound at Mao was good. And maybe one of these days I’ll actually get to see The Lumineers on our home turf.

And oh my god! I almost forgot to mention the best part: doors opened at 8, and The Lumineers started playing by about 8.30 I think, which means the whole show wrapped up by 10! Finally, the perfect mid-week gig, meaning after the show ends, you have time for a quick drink and chat and then can still be home and all tucked in by 11 at the latest. Bless.

There was an error retrieving images from Instagram. An attempt will be remade in a few minutes.