Though really, that’s kind of ambiguous. I guess my opinion of post-rock really depends on your opinion of Jesus.

A couple of weeks back, Godspeed You! Black Emperor made its way through Shanghai, thanks to Split Works. GY!BE is an experimental post-rock band from Canada that started in 1994 and released/performed for about ten years before splitting so that some members could work on other projects. But they regrouped in 2010, started touring again and released a new album in October of last year called Allelujah! Don’t Bend! Ascend!.

I was really looking forward to seeing GY!BE, and honestly, I’m not sure why. I had a couple of their earlier albums, but it had been ages since I’d listened to them, and I hadn’t really followed what they were doing for a long time. If you’re unfamiliar with them, GY!BE is a group of about 8 or 9 (lineups change pretty regularly) and do strictly instrumental rock. Their songs are long (we’re talking 15-25 minutes each) and aim to take the listener on a journey, really, if that’s not too cheesy to say. So they’re not your typical rock band, but they do some interesting stuff. It’s not everyone’s favorite though, because the music lacks the standard rock song structure so I’ve heard people describe it as just really long noise pieces. Which, yeah, that’s true. For a lot of people it’s background music. Really nice background music.

But the show was super-hyped (well done Split Works), so basically if you were a foreigner in Shanghai or Beijing you’d heard about it and were planning on going. I got their most recent album to brush up before I went, and yeah, it was good; they sounded pretty much like I remembered them.

First, the show was at the Qianshuiwan Creative Art Center, which I’d never been to before. It was a good space, with good sound. I think either the show was supposed to start at 8 or the doors were at least supposed to be open by 8, and with this being the “biggest show of the year” in Shanghai, people were queuing before 7 as it was general admission and expected to be crowded. But they didn’t actually start letting people in till about 8:45ish. But no big deal, except that the ticketing system was kind of atrocious.

So, the organizers were really pressing the pre-sale tickets obviously, as any good organizer would, and most people I know went pre-sale (biggest show of the year, people). I love Yoopay (the ticket vendor) because you buy your ticket online and then they send you a confirmation e-mail with a bar code that you can print off and they scan at the door, or they can scan it directly from your phone so no paper ticket needed at all (and no waste!). But when they actually started letting people in, pre-sale ticket people went into one queue and it was taking way too long to scan the paper tickets people had printed as they were running late and there were a lot of people, so they just started collecting the tickets and letting people in. If you were meant to scan your ticket from your phone, you were shuffled into another line after that line where you had to re-queue because they couldn’t just collect those and shuffle you in; they actually had to scan. But here was the real kicker: people without pre-sale tickets were able to walk right up to the counter, buy a ticket and go in; skipping the queues altogether. So, uh, people were not happy. I mean, the people who didn’t pre-sale were happy. Everyone else was not happy. At all.

But you know, okay, there were ticketing problems, yeah, but it happens. Except that I also feel that the show might have a been a teensy bit oversold. By maybe about 100 people or more. Obviously, I get why they do that; why they want to crowd as many people as possible into a performance space, because it is hard to get some foreign acts to come to China, and Split Works did try to keep the ticket prices as affordable as possible which is awesome. And finding appropriate venues for the band and the projected audience is more difficult here. I get that. But it’s really sucky to packed into a room where you can’t even see the stage or move. At all. Couldn’t see, couldn’t move.

Side note: I can’t be the only person in China who gets packed into a space like this for some show or another and thinks, “There aren’t any fire exits.” Also, it wouldn’t be the fire that kills everyone, would it? It would be the “getting trampled” part.

Anyway, it was extraordinarily crowded (maybe the most crowded show I’ve been to) and most people were in a sour mood because of the ticketing and the late start and the fact that it was nearly impossible to get to the bar and back. So a sober, pissed crowd. Not the best way to start a show. And because of the nature of the music, and the fact that no one more than two rows back could even see the stage, we actually didn’t even know the show had started until about 10 minutes in. Ha! I honestly thought it was just a droning background noise, until a guy who was about 7 feet tall standing behind me said, “Wait, I think there’s someone on stage.”

Luckily, GY!BE has superb visuals with their music. In fact, I feel like they’re an entirely different band with the visuals. When you just listen to them on a record, you’re like, “Yeah, this sounds good and all but I don’t really get the point.”  They do sound good; they’re great instrumentalists, but it’s so easy to miss what Godspeed is trying to do, which is tell a story, I think, or take you to a specific time and place and experience. So the music will start, usually slowly and quietly and then build and build and build and crescendo and then there will be a long and drawn out denouement. But the graphics they used actually told the visual part of the story, and all of a sudden, everything they did made sense. I honestly feel like GY!BE should only be seen live, because they’re not so much just a band as they are an experience. I have an entirely new respect for them and what they do because it’s not just music.

Buuuuuuut, if you happened to be more than two rows back, I don’t think the average audience member would have gotten this. Basically, you’d be staring at this the entire performance. 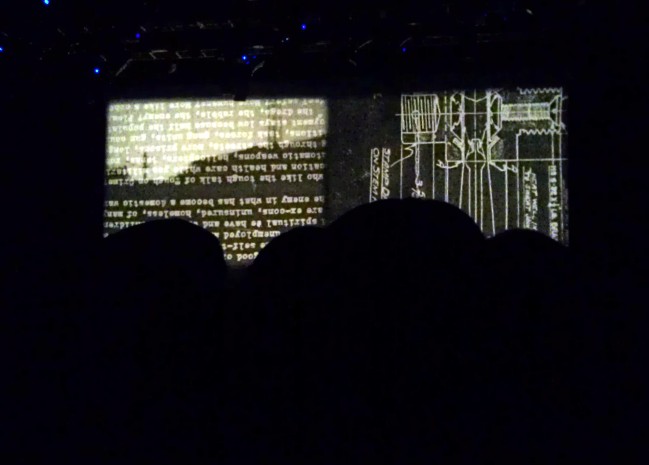 The first part of the show for me was like watching someone’s ambitious yet really derivative student art film, because it was nothing but super cool, antiqued visuals with background music. The reason I go to live shows (maybe the reason most people go to live shows) is to see and hear live musicians. I spent about half the show in this position, behind some dude with a backpack (seriously! What is with all these dudes with backpacks at gigs?!), having no idea what was going on onstage. I hadn’t even seen a musician at this point.

So…I…well, I…well, I pushed forward. Right through the crowd. And I felt terrible about it and still do! But I had to (and, I rationalize that maybe those people didn’t pre-sale and I did so I deserved to be closer and blah blah blah and it was so rude and I never do that at shows but I totally let people push past me all the time so this one time I thought I could do it so I did it even though it kind of makes me a dick). But when I got to the front, it was a totally different show. All of a sudden, I could see that these amazing sounds I’d been hearing were coming from actual people on stage. Five guitarists, two percussionists and a violinist, with assorted other instruments and gadgets and tricks and about a hundred different distortion pedals on the floor. So much different texture and sounds and it was all pretty cool.

And still some pretty bad-ass visuals.

It was so good up close. Duh.

After the show, people were split. Those who were able to see the musicians and/or drink beer thought it was fantastic. The rest were like, “Really? Whatever.” But I liked it. I still don’t really listen to any GY!BE albums while I’m just hanging out, but I would see them live again in an instant.

There’s also a great interview with Archie Hamilton of Split Works at Slink Rat‘s Tumblr (if you’re interested in the China music scene, that’s your site). He talks about the pains of bringing Godspeed to China, and just what that entails. The nitty-gritty of getting foreign acts over here. I remember the Shanghai music scene pre-Split Works and believe me, if you like live music and live in China, you own these guys your soul.

Update: Archie Hamilton blogged about the show on his tumblr, addressing some of the (minor) problems I mentioned, what it’s like trying to get an act over here, and how upstanding GY!BE was to tour with. I’ve told you before, I remember the Shanghai music scene before SplitWorks and do not want to return to that. Archie and SplitWorks are doing good things here and I hope they continue to thrive!

1 Comment on Review: Post-rock is better than Jesus, at least when it comes to Godspeed