Last Friday was the annual Rocksgiving concert held again at Yuyintang, which has turned into a pretty cool charity event with BEAN Shanghai. This is the third time they’ve done it and also the third time I’ve been. It’s always good.

Rocksgiving is a charity event where some local bands agree to put on a show (for free!), volunteers work to put it together (for free!) and some local businesses donate prizes for a raffle (for free! duh). 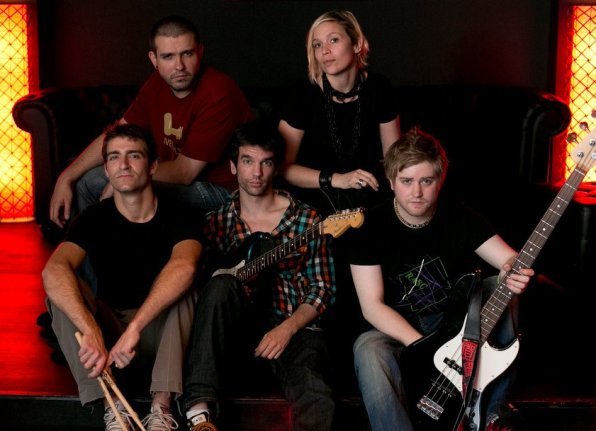 The music was tops. Scary Magic played first, and they were awesome. Really energetic. Like, really energetic. To be perfectly honest, I didn’t think Scary Magic would last in Shanghai. I think that Rocksgiving 2011 was their very first gig (I could look this up, of course, but don’t particularly want to and I feel more that this is a blog based on truthiness rather than facts, and I feel this fact to be the truth so therefore it’s true. So yeah, that was their first gig). And they had more of “We’re super-psyched we’re in a band and we don’t know what we’re doing but we’re on stage and that’s awesome!” kind of vibe about them. You see a lot of bands like this in Shanghai–they appear for 6 months or so and then completely disappear. But Scary Magic’s still here, and lo and behold, they’re getting better! Like, a really nice ska-rock quality about them. 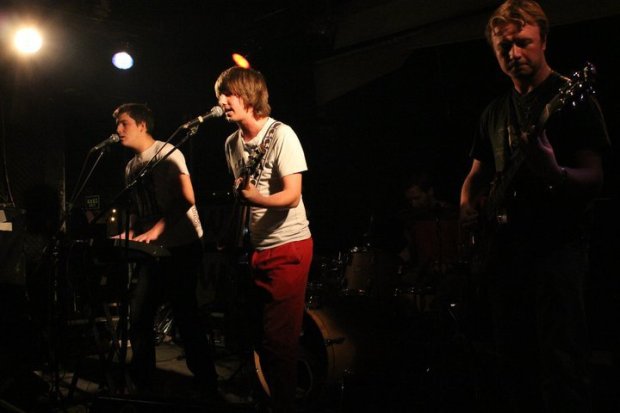 Girls Like Mystery played next, and I was underwhelmed. Oh, they’re fine and all, but they’re indie rock without substance, at least at this point. But how hard can I come down on a band that plays for a charity concert? 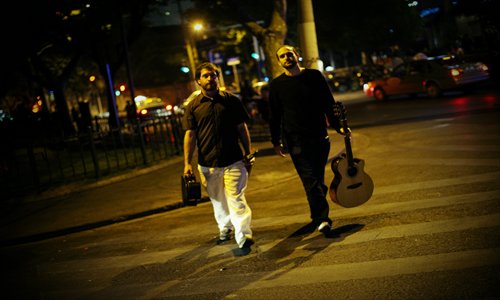 The Horde (photo by Peijin Chen)

The Horde played as well, and I like them. I like them more every time I see them. Finally, some proper folk here! I’m into neo-folk, on a nerdy, completely un-ironic level, and the Horde hits all the rights spots. A mandolin! A harmonica! All the members standing equally next to each other in a line!

Rainbow Danger Club finished up the night, and they killed it. My only problem with them was that the people around me would NOT SHUT UP about how awesome they were. Everyone kept going on and on, which is all well and good–if any Shanghai band deserves the adoration it’s RDC–but it seems like the audience could have saved the exaltation for AFTER they were finished playing. But they really were great.

The crowd in general that night was a bit of a pain, to be honest. Way too chatty. There’s kind of this unwritten rule at gigs that if you want to talk while the bands is playing, you move towards the back (or if you’re a really upstanding person, you go outside or upstairs). If you’re closer to the stage, generally you don’t talk too much. I’m not talking about your random comments like, “These guys are really good;” I’m talking about telling your friend your entire life story at a volume loud enough so that he can hear you over the sound of a band playing five feet from you. The crowd that night did not get this. At all. More concerned with socializing and networking and being seen. But I think maybe I was just standing by the worst of it–meaning a woman who spoke at a volume I have never heard any human speak before. And she seemed to want to introduce everyone she knew to everyone else, right then and there, and then tell them all the same effin’ story over and over again. And I could not get away from her. That was the worst. It was crowded and it seemed like no matter where I went, there she was! It was kind of creepy, to be honest.

But the absolute best part of the night by far–by about a million degrees–was when this woman went to take a picture of a band with her mobile and forgot she was holding a beer in her hand. So when she pointed her phone sideways, she poured her beer all over herself. Best thing I’ve seen at YYT, ever. I don’t believe in God, but it was truly a Thanksgiving miracle.